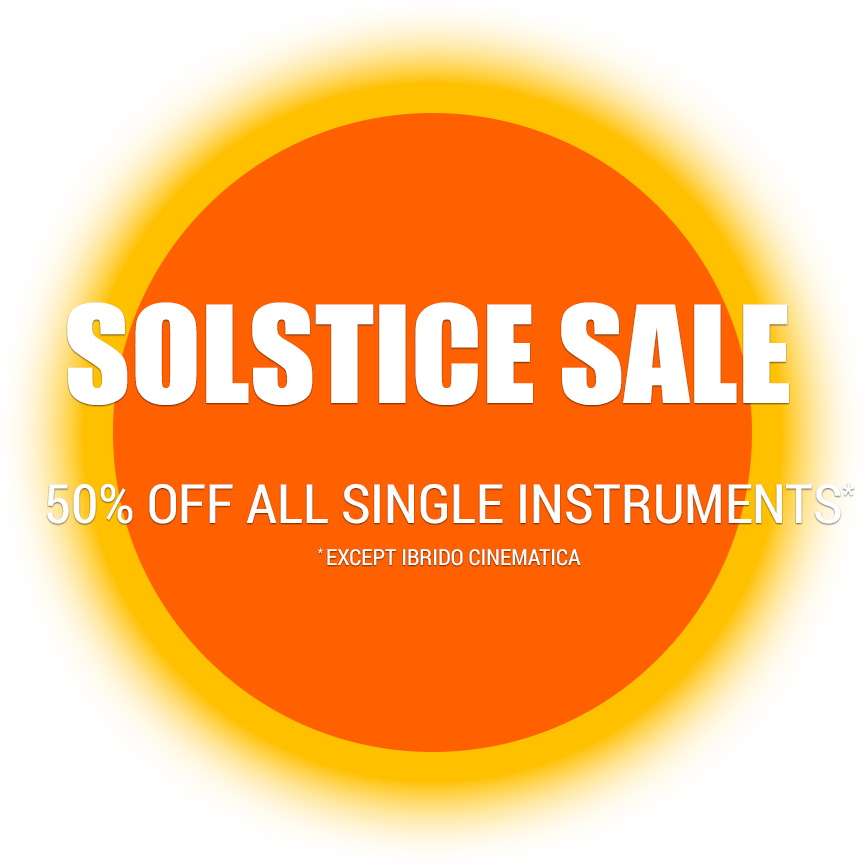 Do you wish you had a top class ethnic vocalist at your fingertips? Need fast and easy inspiration for your tracks?

At Sonokinetic we pride ourselves on seeking out those talented artists that can lift any composer’s track to greatness. With ‘Gediz’ we’ve done it again and bring you beautiful Turkish vocals from an inspirational male singer who has soaked up the rich musical tradition of his culture since before he could walk.

So, if you’ve no time or budget to find yourself a performer who really is the best of the best, then the Sonokinetic vocal line can certainly help you out.

With ‘Gediz' we continue on the path we began all those years ago with ‘Tigris and Euphrates’. Since then our premium ethnic vocal range has spawned some very special instruments packed with stunning vocal performances.

Gediz Coroglu is an amazing vocalist with a unique voice and singing style. We couldn’t help feeling goosebumps during these extraordinary sessions in Istanbul so we’re so pleased that we finally turned these special recordings into a product. Gediz recorded improvisations in 4 keys and at 2 tempi, and in 4 different ‘themes’. As a bonus he recorded two ancient songs for you to use in your compositions, also in two tempi, but because of the fixed range of a song only in two different keys.

As you can hear from the demos written by our talented composers, a major strength of Gediz’s singing is his delivery and performance. Even when there are no lyrics, or they are in a language we don’t understand, we know exactly what he is saying. The emotion never ceases to touch us.

If you would want to contact Gediz for a custom recording we are more than happy to share his contact details with you, please send an enquiry to support.sonokinetic.net

We, at Sonokinetic BV, are very proud to introduce Gediz to you and can’t wait to hear the amazing things you, our valued customer, will produce with it.

Sonokinetic has established a name as one of the best value & quality sample producers and with this product we’d like to underline that statement. We undercut our pricing module and then some and still offer the high quality sampling you have come to expect from us. 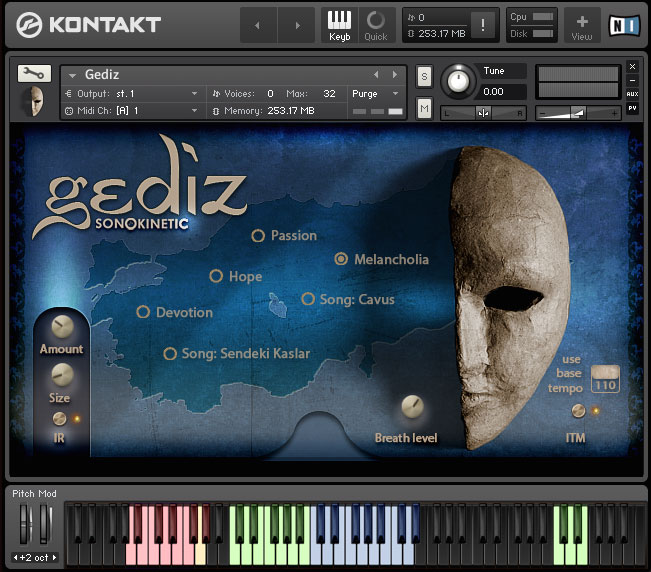 The GUI for Gediz consists of six main buttons to choose between themed groups of songs and improvisations. There are also controls for ITM, reverb and breaths. Phrase length is indicated by an orb that fills with colour to represent the duration of the phrase.

The basic method of playing Gediz is to play notes within the blue keyrange. This range varies depending on which set of songs or themes you have chosen within the interface. The root key of the phrase is determined by the red keyrange. You can trigger end notes or breaths with the green notes.

With the six main buttons you select a specific theme for your session.

The samples contained within each theme are based upon the following moods: Passion, Hope, Devotion and Melancholia. There are also two songs available; Cavus and Sendeki Kaslar.

When you choose one of the six themes the available root keys are displayed as red keys from MIDI key A0 to G#1. The limitations of the human voice and the need for realistic time stretching dictate the sample mapping. Phrases are mapped to the blue keys from MIDI key C3 and upwards. This range varies depending on which theme you have chosen. 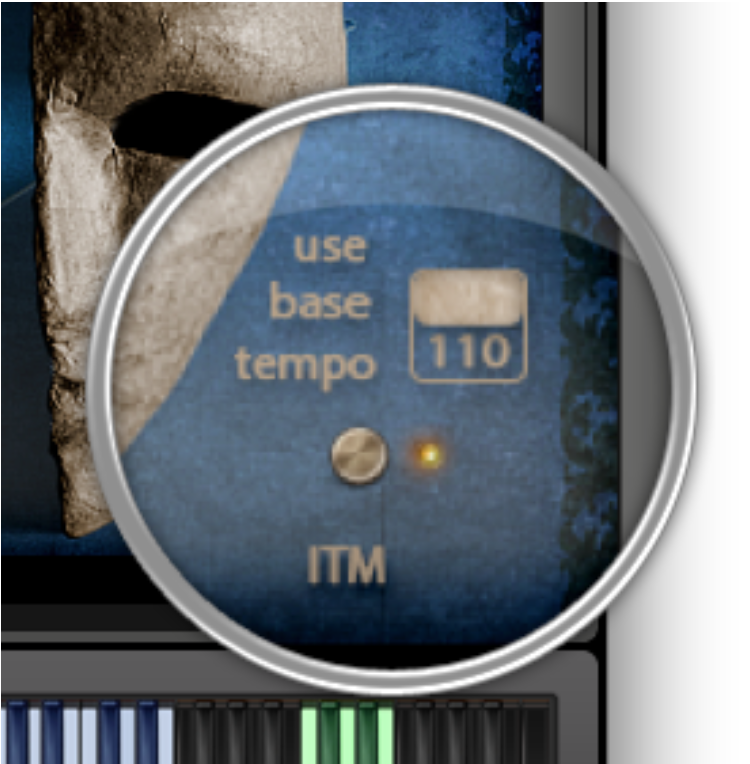 ITM stands for Intelligent Tempo Mapping, and it’s a function we developed in-house to make the instrument adapt in a natural way to tempi ranging from 30 BPM to 300 BPM. Because it doesn’t sound natural when a sample is stretched beyond certain limits, we chose to go to a half-time feel when the tempo is set above a set limit, and to double-time feel when it’s set under a particular limit.

To make the stretch amount even smaller, we have recorded everything for Gediz in two different tempi. ITM will automatically pick the recording closest to your host tempo, even if this means a doubled version or halved version. This effectively makes the vocals within Gediz sound perfectly in time even in extreme tempi without the user having to think about it. ITM happens under the hood and our goal is for you to not even notice it is there.

Activate ITM with the button shown here. Normally we would recommend you leave the ITM function switched on. However, you may wish to deactivate it if your track has many tempo changes throughout which may conflict with the ITM programming. For instance, if your tempo changes cross a threshold where ITM would choose the other set of samples during play.

With ITM switched off you may choose between two base tempo settings. These tempi vary depending on the original source material. This allows you to dictate that a specific sample set is used and stretched to your host tempo accordingly. Note that for the improvisations these recordings will be very different for each tempo, since they are improvised, the songs will be very similar, and the two different tempi there just make sure they sound their best in each host tempo.

You can set the volume level of the breath samples by using this dial. Click and drag to adjust. Ctrl / cmd click to reset the level to default. The breath samples are mapped to the octave below the middle C. We chose to map each sample to a different velocity rather than use round robins, so you can make sure that you get the same breath on each playback, but you still have 50 different breaths to choose from.

Born in Sakarya, Turkey, in 1986. He finished Istek Belde Fine Arts high school with a scholarship. He entered Istanbul Technical University in 2004 and studied Classical Turkish Music at the Voice Education Department. He has passed out and graduated the university with the highest degree as high honour in 2009. He is now an academic lecturer at Istanbul Technical University Turkish Music State Conservatory and giving lectures of repertoire lessons for Turkish Art Music since his graduation.

He has worked with and vocalized many famous and internationally acclaimed Turkish artists such as Tarkan in 2008 and pianist/composer Fahir Atakoglu for the album “IZ”.

In 2010, he has vocalized a show called “Onlar ki” which was specially made for the 95th anniversary of The Battle of Canakkale.

He was a male voice vocal for “Tigris & Euphrates: Voices of The Ottoman Empire” which is an ethnic Turkish Music project by Sonokinetic. His vocal performance for Tigris and Euphrates appears in Magnificent Century (Muhtesem Yuzyil) which is a prime time historical Turkish soap opera television series and is currently broadcasted on the Star TV Channel in Turkey. The show is based on the life of Suleiman the Magnificent, the longest reigning Sultan of the Ottoman Empire.

Gediz was a soloist for the TV programme “Istanbul’un Muzikli Sokaklari” for TRT Music Channel in Turkey which has broadcast 25 programmes.

He is still a voice artist at Republic of Turkey Ministry of Culture and Tourism Istanbul Government Turkish Music Association and Cemal Resit Rey (CRR) Association.

Sonokinetic are very lucky and grateful to have Gediz Coroglu on board for this project.